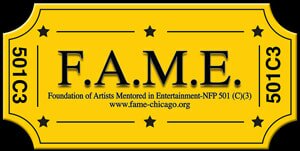 Basia Staszel Emano
Basia has more than 30 years experience in the entertainment industry under various roles including talent, manager, casting director, and most recently, Senior Marketing Assistant at Broadway in Chicago. She has always been passionate about the Arts and Humanities and is thrilled to use her background and skills to give back to the artistic community through F.A.M.E.

Juan Free
Juan has been a graphic artist and musician for more than 20 years. He follows and appreciates all forms of art, and believes deeply that no one should ever be held back from their artistic dreams. Juan got involved with FAME to help and inspire others to pursue their artistic passions.

Mary Rita Mitchell
Mary Rita has been involved with theatre for decades. While an English teacher at Morton High School she spent 10 years as a member of the theatre department. Her experience includes directing, choreography, and set design. She also assisted in producing theatre workshops for younger students, and worked as a production assistant and sceneographer at Riverside-Brookfield High School. Additionally, Mary Rita spent 20 years with the Ballet Legere of River Forest. In her long career she has also worked with Pilsen's Cenacle Theatre Company and the Savoyaires of Evanston. Currently, she works as a production assistant with the Lira Ensemble, artists-in-residence at Loyola University of Chicago.   ​

Tom Rusnak
Tom has been involved in the world of performing arts for more than 40 years, working as an educator, director, designer, facility manager and performer. He directed the 2002 Illinois Theatre Association's All-State production of 'The Pirates of Penzance,' and spent 25 years as Technical Director for the Lithuanian Opera Company of Chicago. Tom also served as a Lighting Designer and Technical Advisor for the Ballet Legere of River Forest, and City Lit Theater. He directed Pilsen's Cenacle Theatre Company, and the Savoyaires of Evanston and currently serves on the technical staff of the Lira Ensemble of Chicago, artists in residence at Loyola University, a position he’s proudly held for more than 35 years. Tom is a staunch supporter of the performing arts and believes F.A.M.E.'s mentoring program is the ideal way to support the industry.

Taylor Mallory
​Auxiliary Master of Ceremony
Mallory, is a multi-talented singer, songwriter and entertainer, and an integral part of Chicago's thriving music scene. He's currently creating hits with Dupée Productions, and integral to garnering national media attention for the team which has been featured on multiple shows including The Style Network’s “How Do I Look." Mallory has acted in various commercials and was an on-air VJ for Akoo. He has collaborated with, and opened for, artists such as Mary Mary, David Banner, and India Arie. Mallory can be seen performing at most of Chicago's storied venues; Schuba’s, Manifest, The Double Door, Subterranean, African Festival of the Arts, as well as Milwaukee Brewer’s Tailgate.

Ashleigh Ashton
Since becoming F.A.M.E.'s first winner, in 2012, at 16-years-old, Ashton has enjoyed incredible opportunities. Now 19, she has written more than 150 songs, was featured in a national T-Mobile commercial, won the Rialto Idol, and was a finalist in the Colgate Country Showdown. In 2014, Ashton won Chicago Independent Music Award's Best Pop Artist in Chicago. In 2016, she performed at music festivals in New York, Florida, and California. She's also a passionate actor, and an alumna of the Piven Theatre Company and a member of Second City. Ashton speaks at colleges and high schools, inspiring and empowering people to reach for their dreams. She is honored and thrilled to be working as a F.A.M.E. mentor.

Brenda Pickleman
On-Camera & Film Coach
Brenda began her acting career more than 25 years ago and is currently one of Chicago's busiest and most prolific onscreen actors. Her credits include commercials, voice-over work and numerous TV appearances plus starring, co-starring, and supporting roles in movies such as 'Groundhog Day,' 'Looking for Lola,' 'Unconditional Love,' 'U. S. Marshals,' 'Hit and Run,' and 'Save the Last Dance.' Over the past 25 years, not only has she directed and produced films of her own, she has trained dozens of actors, many of whom are currently working in Chicago and LA. She continues her acting studies in LA, and brings the unique perspective of that city back to her Chicago acting workshops.

Marlon Cordero
F.A.M.E.'s Photographer
Born in Iloilo City, Philippines, Cordero began his photography career in 2007, by photographing his two young daughters. What started as a hobby soon turned into an interest in capturing special moments. In 2010, he started doing fashion photography and fell in love with it. Cordero still photographs all kids of life events including weddings, parties, and portraits of both adults and children. He is also an avid landscape photographer. Visit his Facebook Page at MCordero Photography and on Instagram at Marlon Cordz.
Chicago non-profit organization for artists. ... Welcome,. Foundation of Artists Mentored in Entertainment. (c) 2010 F.A.M.E.. Thank You for Your Support